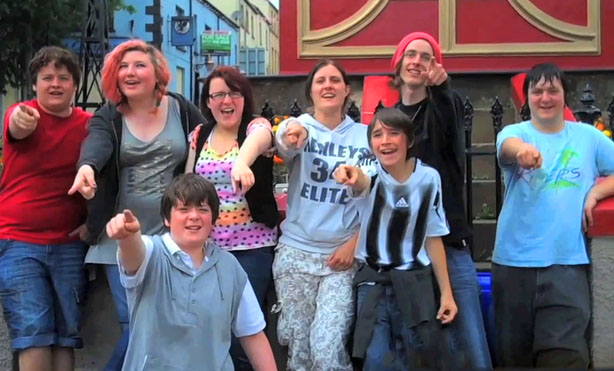 Members of Mess Up The Mess created the Get Involved – Heritage film, 2010

A group of young people from Mess Up The Mess have challenged the stereotype of the disengaged teenager in favour of getting involved in a heritage project, in their own, free time.

With a brief from the Heritage Lottery Fund (HLF), young people from Mess Up The Mess Theatre Company in Ammanford were asked to create and produce a short film which would demonstrate that young people do have an interest in their heritage and enthuse other young people to be open to creating and being involved in a heritage project.

The group of 12 young people met weekly at evening meetings, as well as weekend filming sessions over a 12 week period. They participated in brainstorms, research, writing and music sessions, and filming and editing workshops during the preparation stages. They then led the directing, acting and filming on location, and also helped edit the final film.

The film, titled ‘Cymryd Rhan – Get Involved’, follows the young people as they explore the mythical legends and the industrial past of Merthyr Tydfil, and highlights their favourite heritage attractions in Wales, including Bedwellty Park and Cyfarthfa Castle.

It is made by young people for young people, with bilingual beat box style rapping and an original song used as narrative, along with fast paced editing and creative scenes including the grim reaper playing an electric guitar: all presenting heritage in a new way.

The film will not only be used as a tool to encourage young people to get involved directly but will also be used to help future applicants to think of ways to involve young people in their projects.

Jennifer Stewart, Head of HLF in Wales, said: “We’re delighted with the film as it’s a unique and contemporary piece of work, which is sure to capture the imagination of other young people. It’s brilliant to see a film about heritage that has been created by young people, as they are ultimately the ones who will keep our heritage alive in the future.

Jacob Thomas, aged 17, from Ammanford has been attending Mess Up The Mess for three years, where he has been involved in numerous heritage projects, funded by the Heritage Lottery Fund.

Jacob, said: “I had great fun creating our film, and learned lots of new skills, like directing for example. I have always been the one who follows orders rather than gives them, so wasn’t sure how I’d take to directing, but it came really naturally to me and I felt comfortable with the authority!

“As well as directing, I also composed a song, helped with the recording and co-wrote lyrics, so I got to try my hand at lots of new things, which was great experience.

“Since being involved in Mess Up The Mess, I’ve become more interested in my local history, and as a result even decided to take History at A level. I’ve realised that heritage isn’t just in textbooks, it’s all around us, and I think we get this across in the film.

Ceriann another youth participant said: “I’ve always been interested in writing and it’s my ambition to become a writer one day, so this project has been great experience in helping me to achieve my dream.

“Since joining Mess Up The Mess, I’ve been involved in a few heritage projects, and I feel like I’ve gained more confidence as a result, which was one of the reasons I wanted to join in the first place. We have great fun, and I’ve made some close friends and learned how to work as a team, in addition to the more practical skills I’ve learned along the way.

“I think the film will work really well in getting other young people to take an interest in their heritage, as they’ll see how much fun we had getting involved in our history. The film is pretty bizarre, especially as it’s a fusion of three genres, so there’s something in it for everybody.”