Andy’s a normal teenager. He’s sixteen, he gets into trouble at school and he wants some extra cash. His twin brother and sister are loveable little puppets and his mother lives in a giant box. He doesn’t get on with his step–sister Mel and he doesn’t remember what his real dad looks like. Their house has a secret that nobody else knows – or if they do, they never talk about it. Social workers are sniffing around, teachers are sticking their noses in and Nan is playing her Playstation.

Andy is a normal teenager. Right?

Hidden was toured across South Wales and Ireland in March 2012. 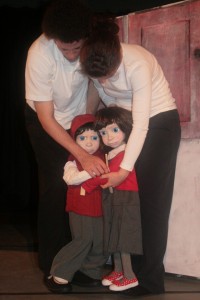 We created Hidden in partnership with Barnardo’s Cymru Carmarthenshire’s Hidden Harm project and Carmarthenshire Social Services. The play explores the lives of young people who are affected by having parents with drug or alcohol misuse issues. Bethan, the writer, worked closely with a panel of young people who advised on the content and style of the script, ensuring the topic was dealt with effectively and authentically.

“I can honestly say that this play would not be possible without the young people that played, shared and advised in our workshops – thank you guys, this play’s for you.” – Bethan Marlow, Writer.

“Beth’s play ‘Hidden’ explores not only the emotional drama of real life situations but also the humour within those difficult moments to help us reach out to our audience and raise awareness of the issues.” – Sarah Jones, Director.