Nowhere | Nunlle
Devised by the company with writer Hefin Robinson

Congratulations!
You have been selected by the Eden Corporation to embark on an exciting adventure. A once in a lifetime opportunity to change your life and be a part of humanity’s greatest ever achievement: the colonisation of a new paradise planet ‘Nowhere’. Join us as a passenger on the Starship Mimosa as we journey deep into space. Nowhere explores themes of community, environment, truth and lies and includes songs, comedy, physical theatre, games and plenty of chances to get involved in the fun. 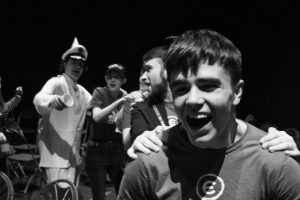 Mess Up The Mess took our interactive sci-fi drama to the RawFfest Youth Arts Festival at the Wales Millennium Centre on Saturday April 27, 2019.

Over the Summer of 2018, a group of 15 young people from Mess Up The Mess worked with a creative team including Allie John (Yello Brick), Hannah McPake and Hefin Robinson to devise and create this genre breaking show. They brought together their interests in sci fi, social media and the future of life on earth. They created songs, physical theatre and films. They played and explored how games could help tell the story. And they made Nowhere: part workshop; part game show; part immersive theatre experience.

At RawFfest, festival-goers took part in a workshop where they learned about the world of Nowhere and were trained for their roles as apprentices aboard the Starship Mimosa. Later they joined the cast for a public performance in which they had a crucial role in the narrative. The audience followed the crew of the starship on their journey, as they began to realise that the wonderful paradise they think awaits them may not be all that they hoped.