A Play by Ciaran Fitzgerald
Directed by Cerian Wilshere-Davies and Jonathan Stuart.

What do you mean ‘Normal’?

A play written, directed and performed by our senior drama group, Wheels challenges our daily perception of disability and confronts the issues of disability discrimination in the school environment.

Wheels was performed on 23 March 2013 at Ammanford Miners’ Theatre.

We first met Ciaran when he took part in workshops developing the play that became Click, by Dafydd James. Ciaran, who has cerebral palsy, inspired a character in the play and went on to portray it during two Wales–wide tours. He has gone on to become a regular member of our weekly youth theatre and has developed a unique creative voice. Ciaran wrote Wheels, a play about disability hate crime, to be staged and fully produced by our Ammanford workshop group.

“Having the opportunity to write ‘Wheels’ and also to have it performed was a fantastic experience because it allowed me to get my opinions across on a theme that I feel strongly about. It was great to see something that I had created in my own mind come together in front of me.” – Ciaran Fitzgerald 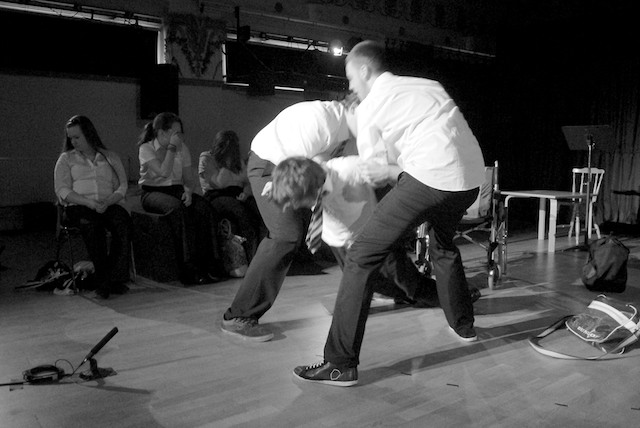 The show was a sell out and we were forced to turn people away at the doors!